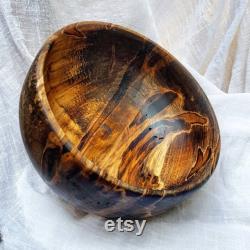 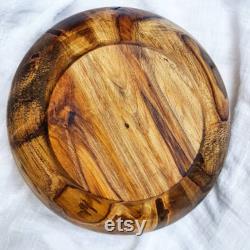 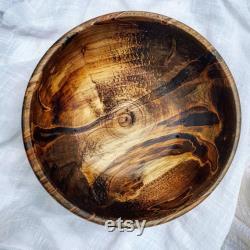 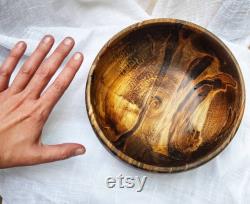 This seven- and three-quarter-inch (7.75 in.) bowl was hand-made in the foothills of the appalachians from maple with responsible ambrosia.

A little over three inches (3) deep with plenty of space. The motifs of the maple ambrosia are created because it hosts the beetle of the ambrosia, which hosts a fungus, which crosses the grain through the insect paths created by the beetles.

These characteristics of the ambrosia maple - inclusions left by the tunneling of the beetles of the ambrosia - can be seen, here and there, on the surface of the wood with the figure. This particularly splendid piece of true maple is a warm wheat with golden reflections, and deep chocolate figure with reddish and sand accents.

The figure appears watercolour in some areas, with splash patterns, while some appear may look like eyes and faces, quite like knots in a tree. This and all our wood pieces were lovingly made to bring out the character and energy of the wood.

It was oiled with flax seeds to preserve the integrity of the bowl and bring out the natural chandelier of the grain. The latter of a kind of work of art would make a distinctive masterpiece ship for a large table setting, or a useful element for minimalist spaces.

The price includes free shipping to the United States. Our wood art is for decoration, entertainment and artistic purposes only and is not intended to be used with food and drinks.