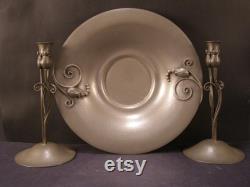 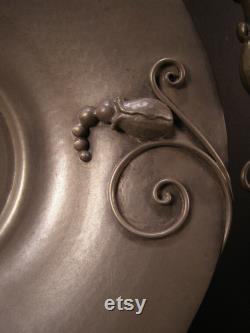 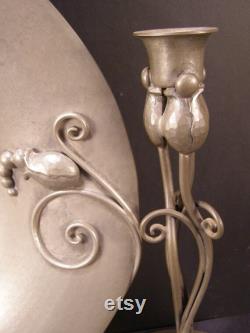 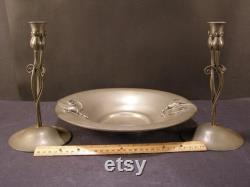 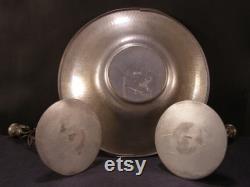 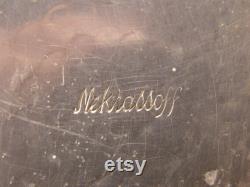 Here we have a wonderful beginning of the 1900s signed hand hammered pewter centerpiece bowl & matching candlesticks with decorative handles and flower tulip decoration. Conu par serge nekrassoff, a Russian-American metallurgyr renowned for its design and superb know-how. These are beautiful examples and are made from high quality hand made pewter a beautiful collection piece.

Serge nekrassoff-history; serge nekrassoff (pronounced ne-kras-ov) was born in Russia on February 10, 1895. In the early 1900s he served in the Russian Imperial Guard. He is fluent in many languages, including Russian, German, French and English. At the time of the Russian revolution (1917), serge was forced to flee westward. He stopped first in Germany and worked for 18 months as a coal miner.

He left soon and went to France in 1919. He first earned his life as a betting taxi driver. At the same time, he began to learn the art of copper forging and began selling his betting pieces in 1920. Around 1923, he went to Argentina and remained there for 18 months, continuing to manufacture and sell his copper parts. In the following month, he lived in New York and had set up his first studio and shop on 14th Street.

In 1931, serge had settled in Darien, Connecticut, and in 1937, a store and studio had been built. Most of the parts made at that time were still made of tin, but some of the combined copper and copper/tin parts were made at that time. It was at that time that the shop employed 18 craftsmen, the most to work for nekrassoff at the same time.

The finished tins, at the height of the depression, were sold in markets in Canada, in southern africa, in London and throughout the United States. Size it is 11 1/2 wide and 9 high. Condition in an intact condition.